One of my guitars is a wonderful old 1978 model Kazuo Yairi classical (CY-130 Conquistador) that I have owned and played for over 45 years. It's a gem to look at, and sounds wonderful, and I had built quite an emotional attachment to it through the years. It has a Red Cedar top, Coral Rosewood two-layer parallel grain laminate for the sides and back, a 2" Nut for my big hands, and a rich tone we see only on instruments from the Japanese master Luthier. 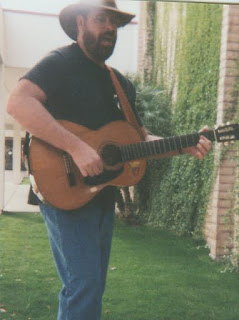 During the winter of 2009-2010, our family was going through a bit of a financial crisis and I chose to sell the Yairi on Ebay. After all, it was not as "practical" as my acoustic/electrics that I gig with, so it was the one I could afford to part with. The guitar sold on Ebay at auction for $1400, and it sold to someone locally. I threw in the hard shell case, and a total stranger came by my house, dropped the cash on my dining room table, and left with my guitar. I choked back tears.

My friends and family were in shock that I had sold that old classical. About two weeks after the sale, I received a call from Spike (real name!), a close friend of mine, and he told me he needed to come by my house, and that he wanted to drop by his Christmas gift a little early. I got home from work and a few minutes later, he pulled up and brought a large, wrapped package up the sidewalk with him. He handed the gift to me, and I opened it. I was completely surprised, and shocked - Spike had purchased my guitar on Ebay, sent a friend that I didn't know to pick it up, wrapped it up and gave it back to me as a Christmas gift! Both Spike and I sat and cried like infants. Other than from a family member, this is the finest gift I had ever received for Christmas.

And no, I will not sell that instrument again.